Many a time just a random idea may formulate into a business when two or more people discuss the idea and work towards it. If such an idea transforms into a business, the biggest question such entrepreneurs face is how the equity must be shared among the founders’. No doubt it’s a tough decision to make and may even end up breaking the ties. But at the end of the day, it is the most important decision to make to get the business going strong. This article aims at understanding how one can decide as to how much equity is to be given to a co-founder.

Why sharing equity evenly is a terrible idea?

As many a time people want to avoid what may turn into a bitter discussion on equity sharing and in the process decide on sharing equity on a 50-50 basis. This shows weak management skills and may cost the company in the long run. Why would this be a terrible idea, you may ask? Splitting equity evenly among the founders can lead to disagreement, conflict and lead to failure of the company since there is clearly no one leader that can lead the company to success by making right decisions at the right time.

Secondly, it is not fair to distribute equity evenly among founders when it is clear that one founder has invested more time, effort into transforming a mere idea into a business. For example, Jack and Josh started a business wherein Jack came up with the idea and shared it with Josh. Let’s say Jack had invested 10 hours on the idea before sharing it with Josh. Josh worked on the idea and modified it to make it practical and successful. Josh invested 40 hours in the process. Both the founders agree on the modified plan. If Jack decides to give 5% of the company’s equity to Josh it would not be fair as Josh has invested more time and effort in transforming the idea into a practical business. This would in turn become a demotivating factor to Josh and he may not contribute his best in future or he may wish to quit.

Thirdly, when two or more people are brainstorming on converting an idea into a business, everybody may seem to be enthusiastic about it at first. But in the long run, they may want to stay as mere investors and take up other businesses or continue as an employee elsewhere. In such a case, if the business becomes successful, it will be more profitable to the investors who have not contributed as much time and effort. This is because they receive the same amount of returns for a reduced effort as compared to the founders whose primary responsibility is the business.

Is there a clear-cut structure that one follows to split equity, one may ask? The truth is, there is no definite answer to that question. The industry has come up with various criteria that people follow to split equity, but it necessarily does not cover everything. Such criteria depend from business to business.

Formulation of the Idea 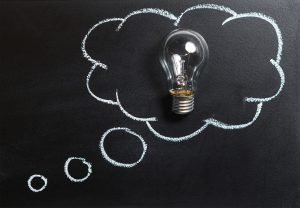 The first and foremost criteria that one considers is, who came up with the idea of the business. This is an important criterion to decide on how the equity is to be split between founders because, had the idea not originated, there would be no business in the first place. What one must keep in mind is, this should not be the sole deciding factor. It so often happens that the co-founders play a vital role in furthering and shaping the idea into a successful business.

So, when splitting of equity solely depends on who came up with the idea for the business, it is likely to be highly demotivating to the co-founders. It may end up in nasty arguments, leading to co-founders quitting the company. An ideal way to handle this situation is to give a premium to the originator of the idea and then splitting the equity based on the contribution an individual has made towards furthering and developing the idea.

Time contributed by the co-founder is of essence Not all contributors to the company may want to work towards development of the company full time. There may be individuals who may want to be silent spectators after contributing to the investment. Others may be employed elsewhere and would intend to continue working in a secure environment. It is no surprise that a start-up works in a dynamic environment and survival of the start-up is what matters in the beginning, than reaping the profits. Thus, not everybody is interested in working full-time for a start-up.

Experience of each founder matters

Imagine a company being run by inexperienced people. Having experienced people manage the business is always a plus point, especially for a start-up. When deciding on matters that lead a company to its success, one must be realistic about their limitations. It does not come as a surprise that good decisions come out of experience. Thus, even if one of the co-founder is an experienced individual and has played a key role in the development and success of a company, the same must be acknowledged.

Contribution made towards Investment Any idea can formulate into a business only if it is well funded. Though funding/ investment is an important aspect to be looked into while splitting equity, this must not be the sole criteria on which equity must be split. Sleeping investors don’t contribute to the productivity and day to day development of a business. Thus, compensating them with a small share would suffice. This is so because, more often than not, investors are not co-founders. They most definitely demand a share in the company, but they are essentially not co-founders of the company.  In such cases, it is vital that the founders of the company give such angel investors a small share in the company, while keeping their share of equity high.

It is important to keep the equity share of the ‘real founders’ high because, if the other investors’ share increases, decision making power of the actual founders reduce. In the initial stages of the start-up, investment may seem to be very important, but losing operational decision power may cost the founders in the long run.

One may wonder why the number of co-founders must be limited. This is so because, the more the number of co-founders, the lesser will one have control over the decision making of day to day activities. If the power is diluted, then it can lead to conflict of interests and cause overall delay in deciding on matters that need immediate attention or the matters which may be of importance to the business.

Do they expect a salary?

What if the co-founder desires to draw a decent salary and get a fair share in the equity? Is that really fair?

Thus, whether a co-founder is drawing a salary or not becomes an important criterion while deciding how much equity is to be given to a co-founder.

The role a co-founder plays in the company can be a huge deciding factor as to how much equity the co-founder may get. A CEO, CFO etc. may get a higher share of equity than a general manager and individuals playing such role in the company.

Not just the role that the co-founder plays, the degree of involvement, skill, capability and the company’s requirement also play a role in deciding how much equity needs to be given to a co-founder.

Since the company’s requirement may change over a period of time, it is possible that the roles that each co-founder may change over time. Thus, it is advisable not to rely too much on the skills and roles that founders and co-founders play to decide the equity distribution

What may one forego to contribute to a company?

When people decide to start a company, it is quite normal that they may be leaving or foregoing something to gain something. One factor that may contribute to decide how much equity to distribute to a co-founder is, how much does such an individual forego or rather sacrifice in order to contribute for the success of the company.

Let us take a tech company having 3 founders for example and take seven criteria to decide on how much equity one must be given in the company and allot weightage for each such criteria.

Based on the above weightage given to each category, on can decide as to how much equity to be allotted to each such founder/ co-founder and come up with a formula to calculate the same. As mentioned earlier, weightage and criteria may vary from company to company and case to case.

Thus, there is no set method to calculate the equity to be awarded to a co-founder as there are lots of variables involved in the process. Each and every factor enlisted in this article affects the valuation of equity for a co-founder. It is critical that the equity is analyzed taking into consideration all these variables depending on the requirement of the company to facilitate smooth functioning and success of the company.